The trauma of birth followed by the trauma of surgery is a lot for a newborn to take on, but for babies born with critical congenital heart defects it is part of the fight for survival.

And if the defect repair requires new heart valves, the initial repair surgery is just the first of many battles.

Replacement valves in use today, whether artificial or recovered from a donor, cannot grow along with the child, so they must be replaced several times before their recipients reach adulthood. This requires multiple open heart procedures, with all the risks, hardships and recovery involved.

“Heart valve replacement is very successful in adults,” said Rajab. “We have excellent outcomes. But the problem for young children is that if you replace the valves, the heart valves don't grow with the children, which leads to a lot of problems and the need for future reoperations.”

Rajab had been contemplating this problem for years. And as he considered that a full heart transplant grows along with the patient, he wondered: what if you could transplant only the part of the heart that contains the valves? He called this concept a partial heart transplant and went to work to make it a reality. 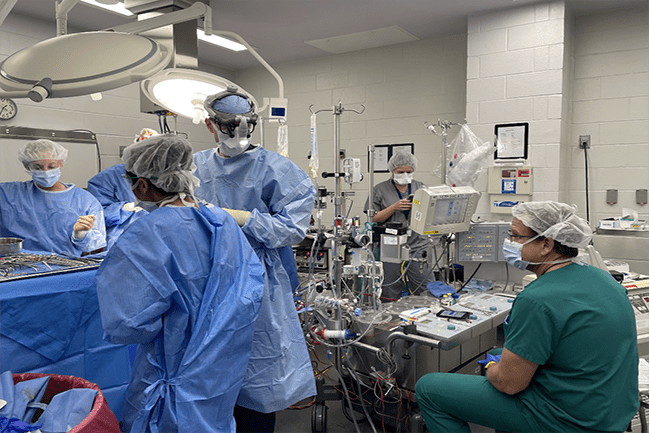 Rajab and his team at MUSC perform an experimental partial heart transplant in a piglet to make sure that the valves truly grow after transplant. Credit: Rajab lab, MUSC

Hard work and kismet paid off. Rajab needed to prove and fund his concept, and he needed help from people with the right expertise to work through challenges along the way. By joining MUSC, he placed himself in proximity to the exact mix of experts he needed — experts in echocardiography and pediatric clinical trial design, animal experts and an academic perfusion team for research and development in piglets, and of course, pediatric cardiothoracic surgeons.

He also partnered with the pediatric cardiology experts at Duke University, and in April 2022 he saw the fruition of his concept: the first human partial heart transplant was performed successfully at Duke in an 18-day-old baby with truncus arteriosus and a severely deformed truncal valve.

Rajab harvested and delivered the donor organ for the procedure and then witnessed the historic moment when his idea became a feasible and lifesaving feat.

“The patient did very well,” Rajab said. “They were discharged around day 30, and on follow up we were thrilled to see that the valves continued to grow.”

Congenital heart defects are the most common types of birth defects, affecting about 40,000 babies per year in the United States.

Among these, truncus arteriosus is a rare but critical one where just one blood vessel exits the heart rather than differentiating into the aorta and the pulmonary artery during development. This is usually accompanied by a ventricular septal defect — a hole between the two bottom chambers of the heart — thus allowing mixing of the oxygen-rich blood from the lungs with the oxygen-poor blood arriving from the periphery.

Compounding this situation, there is just one valve, the truncal valve, and it may be leaky, abnormal or nonfunctional. Although truncus arteriosus is a rare defect, it is fatal without surgical correction, and if the valve is defective the mortality rates for these children can be grim. 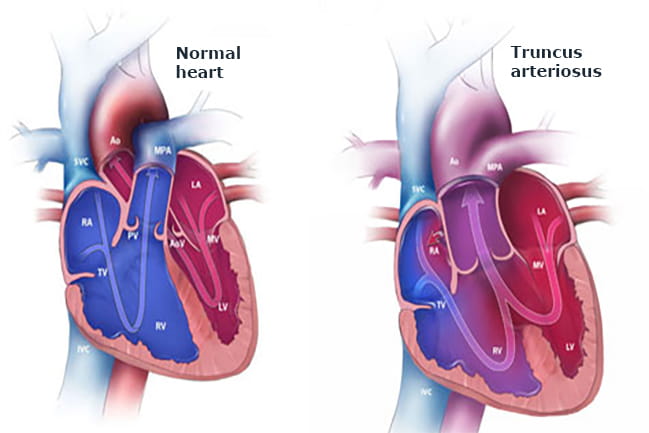 In a normal heart, the aorta and main pulmonary artery differentiate and carry their own valves, but in a truncus arteriosus heart there is just one vessel and one valve. Credit: Centers for Disease Control and Prevention, National Center on Birth Defects and Developmental Disabilities

Even if two artificial or donor valves can be placed into a heart with truncus, those valves will not grow, and there will be risks to the organ tissue, a buildup of scar tissue in the chest, and infection risks over the course of multiple reoperations as the child grows.

“There's a cumulative burden from multiple procedures during the first couple of decades of life,” said John Costello, M.D., MPH, director of research for the MUSC Pediatric and Congenital Heart Center and an expert on clinical trial design. “So having a valve that functions well, is not narrow, and grows with the patient helps overcome a lot of those issues for this and other complex valve problems.”

To bring his concept to life, Rajab knew that he needed to test it in an animal model first. He collaborated with others at MUSC and Duke University to perform partial heart transplantation in piglets to see if the valves would grow.

After the first three successful procedures in piglets, echocardiograms showed that the valves grew with the pigs over the course of a 60-day period when the animals doubled in size.

“All of the valves grew, there was no increased pressure gradient, and they all functioned very well,” said Rajab.

Having access to a crew of talented individuals at MUSC made all the difference, according to Rajab. “We were lucky that we had a perfusionist, a trialist, and all the other technicians, researchers and fellows we needed,” he said. “And once we found that the valves grew in piglets, we started talking to our collaborators at Duke about the possibilities for human surgeries.”

And when he encountered difficulties with piglet survival, he brought in Marc Hassid, M.D., head of pediatric cardiac anesthesia, and David Fitzgerald, DHA, MPH, division director of the MUSC Cardiovascular Perfusion Program, to overcome obstacles related to anesthesia and perfusion, respectively.

Finally, Costello worked with Rajab and his team to design a clinical trial and obtain the needed approvals.

The Leap to Humankind

With the proof that partial heart transplantation works in piglets and the transplanted valves do indeed grow, and with human clinical trial approvals in place, the teams at MUSC and Duke began to scout for an appropriate human case, which occurred in the spring of 2022.

Because the procedure itself had never been performed in a human infant, the two teams used 3D-printed hearts, both without defects and with the specific defect of the first infant case, to model various approaches to partial transplant.

This customized method led to a plan where the root from a normal donor heart, including the valves, would be removed and transplanted into the recipient heart, from which the defective valve would have previously been removed. The surgeons would then use donor ventricular septal tissue to close the septal hole between the ventricles. 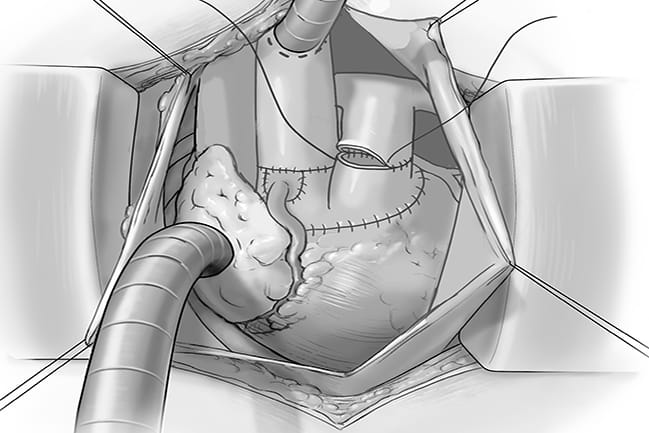 Cartoon image depicting the surgical plan for the first partial heart transplant in a human baby. The root of the donor heart, including the valves, was transplanted into the recipient heart, and the septal hole was repaired with donor ventricular septal tissue. Credit: Insil Choi.

The first procedure was performed successfully by Joseph Turek, M.D., Ph.D., at Duke University, with Rajab in attendance. Having made the first leap and seeing success and a healthy baby over the first months following surgery, Rajab and the teams at Duke and MUSC are ready for more opportunities to help young patients and their families thrive.

“We're looking for the right indications and the right patients,” said Rajab. “But when someone needs this operation, we're all set up and ready to do it.”

As the teams wait for appropriate cases, there is still much to learn.

For now, all patients will remain on full immunosuppression, but there may came a day when that is not necessary.

Finally, the group at MUSC is working with Sharing Hope, South Carolina’s organ procurement organization, to set up a system to identify partial heart transplant donors. Such donors will be in a slightly different category from full heart donors, and partial transplants can also use organs that are donated after cardiac death.

Costello emphasized the importance of ethical and equitable considerations. He shared the finding that for organ donors under two years of age, about a third of hearts cannot be used because they can’t be matched to an appropriate recipient.

“It’s really important with this project that we’re not taking full hearts that could go to another child,” he said. “Instead we’re making good use of organs that would otherwise have to be discarded.”

Ultimately, avoiding reoperations and the associated risks, costs, recovery time and many other factors will provide a pivotal change for children and their families who are battling congenital heart defects.

Fitzgerald summed up the whole team’s sentiment. “It's been exceptionally rewarding to be part of this project,” he said. “And we are very optimistic that this novel operation will improve the odds and quality of life for many young children.”