Much of the research on scleroderma, a connective tissue disease that causes scarring, or fibrosis, has focused on the increased number of proteins promoting fibrosis in these patients.

A research team at MUSC took a different tack and measured the levels of an antifibrotic protein, Cathepsin L, in these patients. They report in the journal Rheumatology that patients with scleroderma had reduced levels of this antifibrotic protein, and the Cathepsin L that they did have was packaged in an inactive state that deprived it of its antifibrotic function. The team was led by Carol Feghali-Bostwick, Ph.D., the Kitty Trask Holt Endowed Chair for Scleroderma Research, and M.D.-Ph.D. student Joe Mouawad, a National Scleroderma Foundation predoctoral fellowship awardee.

“I think the most important thing here is that it’s a new angle from which we tackled fibrosis,” said Mouawad. “A lot of the research out there focuses on what is driving fibrosis. What we show here is what is missing that could have prevented fibrosis.”

Fibrosis occurs when excess collagen accumulates in the space surrounding the cells. In patients with scleroderma, fibrosis occurs in the skin and internal organs, leading to impaired organ function and eventual organ failure, leaving them with few treatment options other than transplant. The leading cause of death in patients with scleroderma is lung fibrosis, according to Mouawad – approximately 40% of those patients will not survive past 10 years. The Food and Drug Administration has approved new drugs for lung fibrosis in these patients. However, these drugs only slow the progress of fibrosis instead of stopping or reversing it.

“They buy patients extra time, but they’re not a cure. That’s why research into new treatment options is urgently needed,” said Feghali-Bostwick. 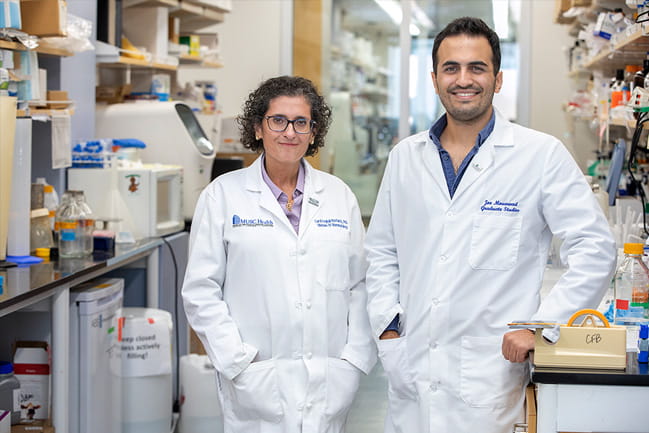 Earlier work by Feghali-Bostwick identified a potent antifibrotic protein, endostatin, that is naturally produced by the body in response to fibrosis. When her team looked at fluid from the lungs of scleroderma patients, endostatin was not at a level to help to reduce lung fibrosis.

“For some reason, the levels of endostatin do not reach therapeutic levels,” Mouawad said. He wanted to know why.

He decided to examine the role of Cathepsin L because it is known to be necessary for the release of endostatin. He and Feghali-Bostwick isolated cell samples from the lungs of patients with  scleroderma. They also studied tissue samples in culture because that more realistically mimics the physiological conditions of the living human lung.

Through these studies, they found that the lungs of patients with scleroderma have less Cathepsin L than healthy lungs. They noticed that Cathepsin L was also reduced in fibroblasts, the cells responsible for fibrosis. Finally, Cathepsin L was packaged in an inactive form, preventing it from being activated so it could improve fibrosis.

Based on their findings, they wonder if restoring Cathepsin L levels and function could have a therapeutic benefit for patients. But first more research is needed.

“We need to learn how to restore the expression of Cathepsin L and increase its activity in these patients,” said Mouawad. “If you tip the balance toward accumulation of fibrotic proteins, then you’re going to have fibrosis. If we can find ways to tip it back by increasing the antifibrotic proteins, then we could get healing and resolution.”

Feghali-Bostwick agrees that reducing the mortality rate of patients with scleroderma and healing their lung fibrosis will require shifting the seesaw in favor of more antifibrotic proteins, such as Cathepsin L and endostatin, with fewer profibrotic proteins.

“The body has its healing processes. Trying to increase endostatin levels because it’s antifibrotic is one of the body’s ways to heal the fibrosis,” Feghali-Bostwick said. “But for some reason, the response is insufficient or blunted. We need to find ways to somehow boost these internal natural healing processes.”