Ahead of the Curve

Genetic engineering is a modern buzzword whose roots date back thousands of years, to the advent of selective breeding. What began as domesticating wolves and leapt to cultivating crops has now grown into CRISPR-based genome editing technology.

CRISPR, or clustered regularly interspaced short palindromic repeats, describes short and repetitive segments of DNA that are part of the bacterial defense system against foreign invaders. By guiding CRISPR-associated nucleases like Cas9, bacterial RNA can target a specific and precise site in the invading DNA and use the nuclease to destroy it. Scientists have recently harnessed this ancient process to pinpoint the roles of specific genes throughout the human genome by way of animal models.

By slicing DNA with Cas9, which is akin to using exact molecular scissors, scientists are able to more easily and efficiently remove or change a particular gene from a mouse or rat in order to understand its functionality. Instead of having to breed mice over many generations to obtain only a few models with the knocked-out gene, researchers can use CRISPR/Cas9 technology to quickly and reliably engineer animal models with their intended modifications, and they can do it at MUSC by using the services of the Transgenic and Genomic Editing Core, also known as the TGE Core.

The TGE Core’s scientific director, Alexander Awgulewitsch, Ph.D., and research specialist Jan Guz work with researchers both affiliated and not affiliated with MUSC to create animal models. “CRISPR technology came into being back in 2013,” he said. “And in that time, we have adopted this new methodology at MUSC.”

By partnering with the TGE Core, which is the only one in South Carolina, researchers can make advancements more quickly than they could in the past.

The difference for MUSC Regenerative Medicine and Cell Biologist Russell Norris, Ph.D., was speed. “We went from sitting down and saying we are looking at this mutation to actually having a mouse in just a few months,” he said. Working with five independent lines provided the opportunity for supertargeted research. Knocking out a gene can have unintended side effects, but using the Core’s technology and researching multiple lines of an animal model gives the team more confidence in their results.

“All five of those lines had the exact same phenotype,” said Norris. “So, we were completely confident that our mouse was the right mouse and was truly representative of our study.” It made for a seamless and streamlined analysis of his research on mitral valve prolapse (MVP).

As one of the first studies to use MUSC’s new TGE Core, Norris’ recent paper in Science Translational Medicine (also highlighted in Nature) examined the defects in primary cilia that lead to MVP later in life. MVP is one of the common causes of heart murmurs: it affects 1 in 40 people and is the most common indication for mitral valve surgery. While its origins are poorly understood, MVP occurs when the two valve flaps in the mitral valve do not close properly and instead swell into the left atrium, and severe cases can cause arrythmias, heart failure or sudden cardiac death.

By studying the slow advancement of this genetic disease in animal models, Norris and his team hope to one day keep patients from needing mitral valve surgery.

Another MUSC research team used the TGE Core to create animal models that shed light on breast cancer risk. As reported recently in PLOS Genetics, these researchers used rat models to study breast cell proliferation and the role of the Cdkn1b gene, which encodes the protein p27. As a key regulator of the cell cycle, p27 may contribute to breast cancer risk and tumor growth regulation.

In people, there is a separate subpopulation of luminal epithelial progenitor cells that has been associated with breast cancer risk. By using CRISPR/Cas9 technology to delete the Cdkn1b gene in an animal model susceptible to estrogen-induced mammary tumors, researchers found a smaller pool of these cells, which points to p27’s role in regulating this population.

“This study also found that cells with and without Cdkn1b reacted differently to progesterone receptor signaling, which could indicate this gene may affect many different cancer pathways,” said Awgulewitsch. “I think that would be an exciting next step, to look into that.”

These two papers are the first of many in the pipeline that are using the TGE Core’s genome editing capabilities to make speedier advancements in the study of genetically linked diseases at MUSC. The Core can be used to knock out a specific gene in animal models unconditionally or to introduce conditional knockout alleles as a way of monitoring how certain genes are expressed.

Researchers can also study function by using a “safe harbor” for gene expression, where a gene is overexpressed in an animal model at a specific genomic location where other genes are known not to affect expression. And these are just a few ways of using this technology.

Awgulewitsch is hoping the local presence of this rapidly changing genome editing technology can make a difference to researchers throughout the Southeast. “We have to continuously monitor the scientific literature in the CRISPR field, as it progresses almost daily,” said Awgulewitsch. And that’s just part of what makes this new methodology so inviting and so important. 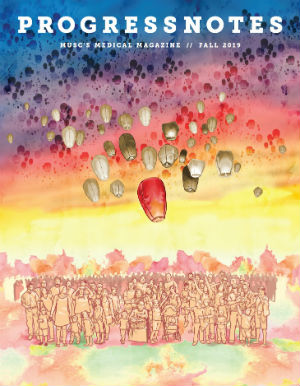