An Engine Tune-Up for the Ankle

Agile, lean, dynamic, compact – for some these words evoke images of fast sports cars. But for Daniel Scott, M.D., MBA, an orthopaedic foot and ankle surgeon at MUSC Health, they apply just as well to total ankle replacement, or TAR.

When someone is suffering from ankle joint pain, stiffness or lack of mobility, their main surgical options are ankle fusion or total ankle replacement. During an ankle fusion, the bones of the joint are secured together with a combination of plates and screws but at the expense of the ankle’s range of motion. In a TAR, ankle joint mobility is preserved using a prosthetic joint replacement, which can also reduce stress on joints surrounding the foot and ankle. That’s why Scott prefers to think of TAR as a sports car and fusion as a pick-up truck.

As tools and methods for total ankle replacement have improved, so have its outcomes, and although it is still not as prevalent as ankle fusion, it’s being performed with increasing frequency according to the American Academy of Orthopedic Surgeons.

The ankle, also known as the tibiotalar joint, is where three different bones meet, each cushioned by cartilage: the tibia, the fibula and the talus. When the cartilage wears away due to either injury or arthritis, the bones rub together and cause pain. A TAR is often indicated when the pain can no longer be managed through medication or ankle braces, and it consists of three different pieces: two metal components are attached to the tibia and the talus, with a plastic spacer sitting between them. 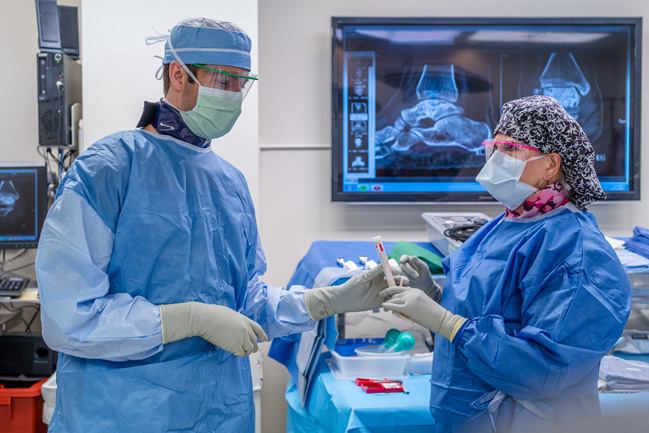 The surgeons at MUSC take a team approach to total ankle replacements.

As one of the highest TAR volume centers in the Southeast and the highest volume center in the state, MUSC Health takes an unusual approach to the procedure. Instead of having one surgeon in each operating room as is common, MUSC surgical teams have two orthopaedic surgeons on each procedure.

By performing TARs alongside Christopher E. Gross, M.D., another orthopaedic foot and ankle surgeon at MUSC Health, Scott finds his patients have better outcomes. “It allows us to move more quickly and accurately,” he said. “We are more efficient, and our outcomes are more reproducible, which allows us to have a higher volume, but we also find that our patients tend to do better.”

Another benefit to the team approach is increased experience. Since the ankle joint is more affected by the position of its surrounding joints than with a knee or hip joint, other procedures are often performed at the same time as a TAR to realign the foot and ankle or to release tight tendons. Ankle replacements have yet to reach the success levels of hip or knee replacements, but more active patients appreciate the increased mobility compared to what they would see with an ankle fusion.

As part of an academic medical center, Scott and Gross also study their own outcomes and look for ways to improve them. Scott says the goal is to become the best TAR team in the country, and performing each procedure as a team is an important step.

“We get referrals from all over the state as well as North Carolina, Georgia and even New York and Florida,” Scott said. “Folks know that we can handle both the run-of-the-mill TARs and the complex ones. Having the ability to tackle the tough cases as a team really lets us do things more efficiently and in a much more reproducible way. It improves our patient’s outcomes.”

Scott says patients can expect to leave the hospital either the day of the surgery or the day after and are asked to keep weight off their ankle for 2 weeks before starting to walk again. At 6 weeks, patients begin physical therapy and can expect to be back on the golf course or tennis court 3-4 months after surgery.