Sliding on a pair of large black goggles can transport you to another plane. It can virtually change your reality, taking you from the mountains of Nepal to the beaches of Hawaii. Or it can help you experience something entirely new, like the adrenaline rush from jumping out of an airplane. And now that same technology is being applied to patients at MUSC.

While some can argue that 360-degree murals from hundreds of years ago were our first attempt at virtual reality (VR), the Sensorama, invented in 1957 and patented in 1962, is widely considered the original VR technology. Created by Morton Heilig, the Sensorama was essentially a viewing screen surrounded by a booth. To immerse its viewer in a fully 3D world, the machine used a combination of sound, smell, vibration and wind.

Today that viewing screen is smaller. A modern VR headset consists of a large, clunky pair of black goggles whose lenses face a screen directly in front of the eyes. In addition to goggles, people can use a handheld remote similar to a video game controller to help them react to and manipulate this virtual world.

It wasn’t until the 1990s that physicians started to incorporate virtual reality into the ways they treat their patients. What began as something novel in the medical field is now being used as a common way to practice procedures. Using VR goggles, practitioners can fully immerse themselves in a new surgery and practice in a risk-free environment before ever performing it on a patient. They can even tailor it to an upcoming patient using that patient’s imagery to practice and prepare for any obstacles ahead of the actual procedure. 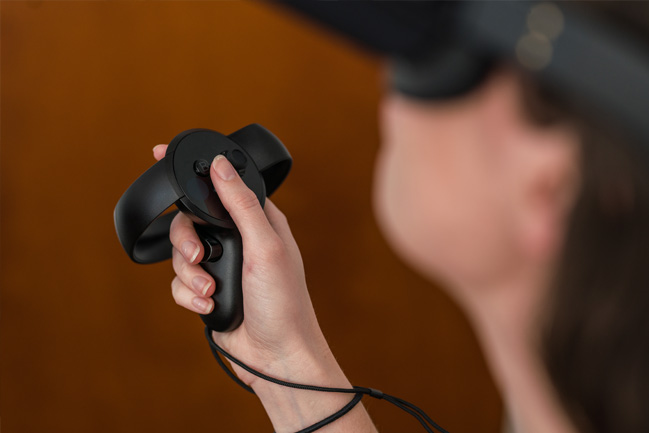 Physicians can use virtual reality to simulate the reach movement in the brain, which can be highly affected after a stroke or with Parkinson’s disease.

And now physicians are taking the leap into the operating room. At one of the first hospitals in the country to take VR from a training tool to a clinical and surgical tool, MUSC physicians are using VR to treat the tremors of patients with Parkinson’s disease as well as learn more about those who have experienced a stroke and help them one day regain mobility.

The National Institute on Aging defines Parkinson’s disease as a brain disorder that occurs when neurons in the area of the brain involved in movement begin to die. Without these neurons to produce the neurotransmitter dopamine, people affected by Parkinson’s disease can experience tremors, stiffness, balance and coordination issues as well as difficulty walking.

While there are medications and therapies to relieve the symptoms of Parkinson’s disease, they are not always effective. Some patients for whom medication does not work undergo deep brain stimulation (DBS), where a physician surgically implants electrodes far inside the brain. These electrodes then connect to a device that is surgically implanted in the chest and stimulates that area of the brain with electrical impulses that help decrease tremors.

DBS is both an expensive surgery and an invasive one, and although it is available to patients with Parkinson’s disease, its effects are not fully understood. Even so, if physicians could find different ways to harness the power of DBS for other disorders, they could potentially help even more patients.

Nathan Rowland, M.D., Ph.D., a neurosurgeon at MUSC, has been using VR as a method of studying how planning for an upcoming movement affects the brain while it’s being stimulated. Rowland places VR goggles on his patients in the operating room and has them perform reaching exercises while recording the area of the brain that controls their arm and hand motion.

The VR goggles work by showing the patient a red ball against a blue backdrop. The patient is asked to grab the ball, which simulates the reaching movement used to perform many everyday tasks and activates the same area of the brain needed to pick up a pencil on a desk at home or to open a door.

“What we hope to learn,” said Rowland, “is how and when to assist the brain.”

Rowland hopes that through these experiments, physicians can tailor electrical stimulation to specific regions of the brain and only activate it when needed. He pictures a procedure where DBS electrodes are placed on the surface of the brain rather than deep within. VR may even one day help make this procedure more precise by showing physicians how patients interact with their environment and, in turn, how the brain responds.

“If we can understand how to control the symptoms of Parkinson’s disease by using VR to pinpoint the placement of electrodes,” he said. “We can extend that technique to patients with other chronic, neurological disorders like stroke.”

And stroke is exactly where he’s taking this research next.

Christian Finetto, Ph.D., a research associate in the Department of Health Sciences and Research at MUSC, is working with Rowland to assess patients who have trouble moving after experiencing a stroke.

A stroke occurs when a person’s artery is blocked or when a blood vessel bursts — and either way, the blood supply to the brain is affected. A disruption like this can have a permanent effect on some- one’s ability to move, and it can limit what they can do on their own.

The same program that works for patients who have Parkinson’s disease also works for those who’ve had a stroke because both affect someone’s reaching movement. By assessing areas of the brain involved in reaching for a red ball or a blue dot, Rowland and Finetto can learn more about how to help their patients.

Rowland has seen improvement in one of his Parkinson’s disease patient’s upper extremity movement with VR. “If we simulate throwing a ball inside the VR goggles, the patient has to catch it,” said Rowland. “If we do that faster and faster, it improves their mobility.”

At MUSC’s Stroke Recovery Research Center, which is directed by Steve Kautz, Ph.D., Finetto performs many similar biomedical assessments to see how people move. By analyzing that data and testing certain interventions, Finetto can find and identify abnormal movement patterns in patients and then quantify their impairment. He compares the technology in the center’s four motion capture labs to the black motion capture suits and markers often associated with film animation. 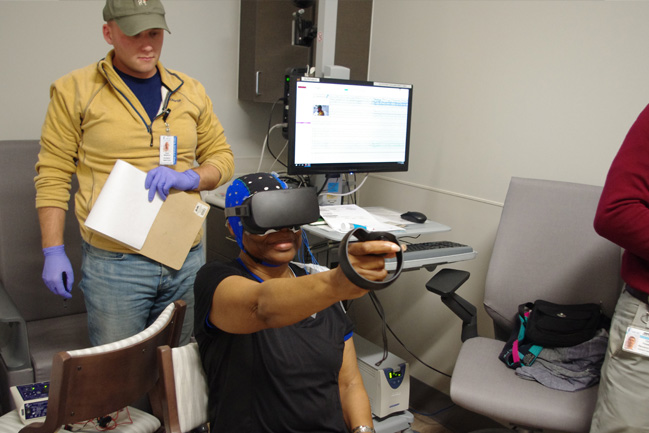 Physicians at MUSC use VR goggles to treat and measure brain activity in both patients suffering from a stroke and those with Parkinson’s disease.

Analyzing neuromechanics in this way, however, involves a labor-intensive setup each time. “Every time you generate a new experiment, you have to generate a new physical environment to test it,” said Finetto. Changing these environments involves physical equipment and the time and ability to move them around multiple times a day for each different patient. “That’s what got me thinking about VR. We could use that to streamline our process and make it possible to generate any environment and test any stimulus.”

Finetto has since done multiple studies to show that movement patterns in virtual reality are essentially equivalent to movement in real life. “VR is a tool for us to study the brain, manipulate a patient’s environment and watch how the brain responds,” he said.

While Finetto and Rowland haven’t used this program as an interventional tool yet, VR has been used before as a form of physical therapy for stroke patients. This is a subcategory of exergaming,
which is when people have to be physically active in order to play a video game. By exposing patients to different scenarios through VR goggles, researchers can observe their different movements in a controlled environment, for example, a lab at MUSC.

Rowland hopes to expand the university’s program to address this area of research as well as investigate whether VR can help patients suffering from post-traumatic stress disorder.

The world changes constantly, but by harnessing that change and controlling it virtually, physicians and engineers like Rowland and Finetto can help their patients retrieve some of their much-needed cognitive function and motor control.