A new team at MUSC Health aims to help more people across the state survive cardiogenic shock — a rare but life-threatening condition.

In recent years, heart doctors across the country have sought to standardize care and improve outcomes. The National Cardiogenic Shock Initiative, based in Detroit, announced trial results in April showing that doctors in 80 participating hospitals increased survival rates to 71%.

Doctors at MUSC Health are hopeful that similar outcomes can be achieved in South Carolina.?Arman Kilic, M.D., joined MUSC Health in March as the surgical director of the Heart Failure and Heart Transplant Program. In response to existing conversations here about the need for a response to cardiogenic shock, he helped to launch a dedicated multidisciplinary cardiogenic shock team.

“There is increasing interest in 'hub and spoke' models for cardiogenic shock at regional health systems across the country, with data demonstrating real improvements in patient outcomes over relatively short periods of time after implementation,” he said.

The team consists of a cardiac surgeon, interventional cardiologist, heart failure cardiologist and the cardiovascular intensive care unit staff. They stand ready to offer their joint assessments of patients being cared for in any hospital in South Carolina.

The team took its first call on a dedicated conference line in June and has already assessed a dozen patients, Kilic said. 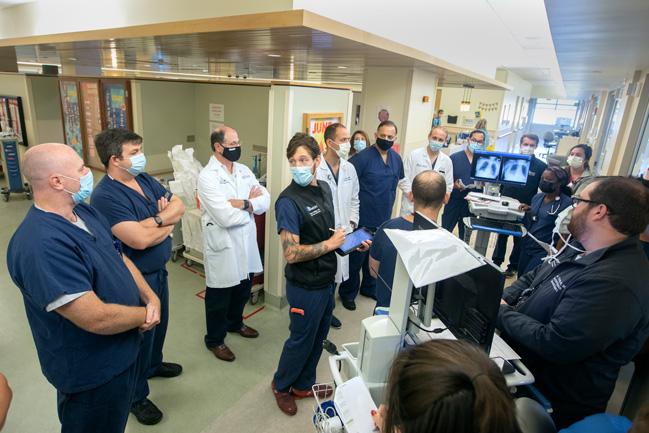 There are specific diagnostic criteria that determine whether a patient is in cardiogenic shock, but Kilic said the team doesn’t want providers to delay contacting them.?

“Timing is very important. We want to hear about patients sooner rather than later,” he said. “Any time there’s any suspicion of it, we’d rather hear about it. That way we capture more patients and don’t miss the window of opportunity for intervention. We’d rather hear about 10 that didn’t end up being in cardiogenic shock than missing the few that were.”

Kilic said the high mortality rates for these patients result from two main factors. The first is simply that these patients are very sick. But systems-related factors — recognizing the condition and then quickly getting the patient to a medical center with advanced heart failure specialists who can respond by implanting devices that help the heart to pump or transplanting the patient with a new heart — are also at play.

When a doctor calls the consult line, the shock team will immediately confer and report back with a recommendation. Some patients could be cared for where they are. In other cases, the recommendation may be to transfer care to MUSC Health in Charleston. The shock team is working to expedite that process so that patients can be rolled directly into the operating room, if necessary.

Kilic and the rest of the team are eager to get the word out to doctors across the state that this service is available to them to help improve survival rates for their patients.

The team will also be tracking patient data to determine whether this initiative improves outcomes as they believe it will.

Health care providers can consult with the cardiogenic shock team 24/7 by calling 843-985-STAT.