When Hudson Heyward was born at 37 weeks, his parents knew he was likely to have lung complications and require a stay in the intensive care unit (ICU). But after nine days on oxygen he had deteriorated and began refusing his feeds. The attending physician ordered an ultrasound of his heart which revealed the alarming cause for his condition. "They said he had hypoplastic left heart syndrome," says Dominique Heyward, his mother. "I had no idea what that was. Things escalated really fast and he was on his way to MUSC within the hour. It was so scary!"

Infants with this single-ventricle congenital heart defect need surgery within the first days of life to survive and at least two additional surgeries later on - some eventually need a transplant. "When I heard that, without intervention, babies with this defect usually fall totally apart after three days, and Hudson had made it for over a week, I knew he was really fighting for his life," says Dominique.

Jason Buckley, MD, a pediatric cardiac intensivist at MUSC Children's Health, led Hudson's ICU team. "He was older at diagnosis than most babies we see with HLHS (hypoplastic left heart syndrome), so our immediate priority was to get him started on prostaglandin to keep his ductus arteriosus open and buy us time to get him ready for surgery,” says Buckley. The ductus arteriosus is a blood vessel that normally closes within 12- to 24-hours of birth due to changes in lung function and oxygen tension that occur when babies begin breathing independently. For some reason, Hudson's had remained open, allowing him to survive long enough to reach MUSC where he could get the surgery he needed.

As they prepared for the procedure, the MUSC team discovered additional cardiovascular issues. "Neonatal heart surgery is always a big deal and the one performed for Hudson is one of the highest risk operations in our field. Hudson's heart had multiple abnormalities that increased the complexity of his surgery and the recovery. In addition to being slightly preterm, one of his heart valves leaked significantly, his aorta - typically the largest blood vessel in the body - was only 2 millimeters in diameter, and he had abnormally high pressure in his lungs," says Buckley. All of these issues increased the risk of the operation and predisposed Hudson to a complicated hospitalization.

Frances Woodard, CPNP, the Fetal and Single Ventricle Coordinator at MUSC Children's Health, worked with the family before, during, and after Hudson's procedure. "It's very devastating to get this diagnosis postnatally because a lot happens pretty quickly and there are decisions to be made along the way," says Woodard. "Our inpatient team supports the families emotionally as well as medically to help them understand the risks and benefits at each step and to figure out the best decision for their child."

Forty-eight hours after arriving at MUSC, Hudson underwent a Norwood procedure - the first in a series of palliative surgeries that children with HLHS often receive. "The surgery will allow him to function with half of a heart," says Buckley. Hudson's surgery went well, and he appeared to be stable in the first hours of recovery. But he took a down-turn on the second night. "I was worried about his trajectory," says Buckley. "His oxygen saturations were low, his blood pressure was unstable, and his kidneys weren't making enough urine, so he was getting swollen. Swelling then puts additional pressure and stress on the heart and lungs, which can become a vicious cycle."

The team decided that Hudson needed to be put on a form of life support called, extracorporeal membrane oxygenation (ECMO). "That was probably worst day of my life," says Dominique. "They told me he needed ECMO and it was our last option to pull him through. Then, before he left the room, Dr. Buckley said, "You know, I'll take care of him like he's one of my own." That just meant everything to us. I'll always have a soft spot in my heart for him because he said that. It was such a relief to know that's how he felt."

An ECMO machine takes blood out of the body and pumps it through filters that perform the functions of the heart and lungs - removing carbon dioxide and oxygenating it. This allowed Hudson's heart and lungs to rest while his kidneys caught up and made enough urine to reduce the swelling. After four days on ECMO, Hudson was stable and could come off the machine.

About two months later, he went home where he is now taking his place in the Heyward family alongside his sister and brother. MUSC's Interstage Monitoring Program, which follows all single-ventricle patients until their next surgery, contacts the Heyward family weekly to ensure that Hudson continues doing well and reaches all of the benchmarks for his second surgery which is expected to be done in the next four to six months. "He had a lot of challenges going into the first surgery and there were real concerns about whether he'd survive his first hospitalization. So, the fact that we're talking about him being at home really speaks volumes about our teams and their capabilities and the kind of care we provide at MUSC," says Woodard.

Dominique agrees, "It was the longest, saddest, most rewarding two months of my life. I learned so many life-lessons watching Hudson fight so hard and for so long. And we're so grateful to all the people at MUSC who were right there fighting with him - the doctors, nurses, fellows, techs, palliative care people. It's like we have a new forever family with them now." 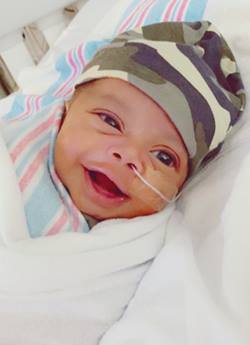 Hudson's case demonstrates why US News and World Report ranks MUSC Children's Health number 12 in the country for cardiology and cardiac surgery. Even more impressive is that they rank number 4 in the country for outcomes. Also, for every heart surgery that is tracked, patients at MUSC Children's Health spend less time recovering in the hospital than the national average. After patients get through their initial medical challenges, the MUSC care team continues supporting them. "As critical as it is to get patients through major surgery and a complex hospitalization, we put equal thought and importance on their quality-of-life after surgery," says Buckley. "Our approach is not to just focus on survival but also on thriving when they go home. The absolute goal is for them to lead as normal and happy a childhood as possible, even if, like Hudson, they need more interventions in the future. This is the best team I've ever been a part of - the collaborative, expert, thoughtful and compassionate approach at MUSC is what makes stories like Hudson's possible."