The storied history behind psychedelics dates back thousands of years and includes uses by ancient cultures for ritual as well as medicinal purposes. The oldest hallucinogen is thought to be a Siberian mushroom known as the fly-agaric mushroom, which was discovered after humans observed reindeer behaving in a way that suggested they were intoxicated.

The modern history of psychedelics, however, began in 1938 when Swiss chemist Albert Hofmann synthesized compounds of a fungus found in rye and discovered lysergic acid diethylamide, or LSD. Since then, psychedelic drugs have been used in medicine to treat mental illness and alcoholism as well as recreationally to alter moods or states of mind. The term psychedelic even stems from the Greek word for “mind manifesting.”

Ketamine is a compound with psychedelic properties with initial beginnings in medicine as well. It was first introduced in 1970 as a nonbarbiturate, fast-acting general anesthetic, but since then uses for ketamine have grown as the field of psychedelic-assisted psychotherapy, or PSP, has grown. And with the creation of MUSC Health’s own psychotherapy center — Centerspace — the hospital now offers both ketamine and esketamine as evidence-based treatment options for patients looking for solutions to their depression when traditional medications have not worked.

Jennifer Jones, M.D., is the center’s lead psychiatrist, and she oversees the scientific program development at the clinic as well as the day-to-day clinical operations. She says the thought behind the clinic is to offer hope. 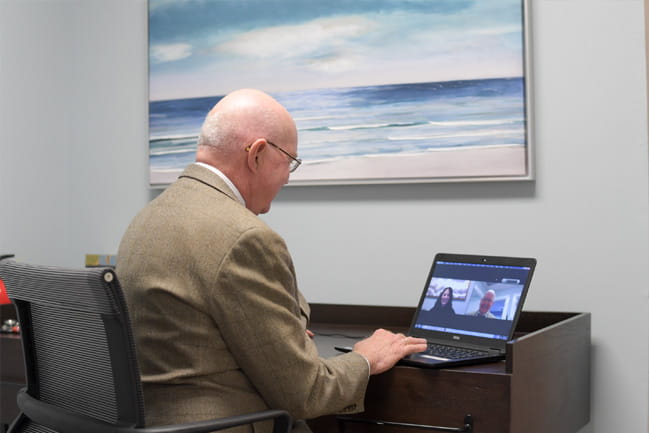 Robert Malcolm, Jr., M.D., also works with Jones in the clinic as a board-certified psychiatrist as well as clinical researcher.

Often only two thirds of patients will respond well to antidepressants, but Jones says that the true number is likely even lower, with approximately one third responding well and the other third responding only moderately. There are side effects as well as people who continue to struggle with depression despite their best efforts and adherence to medications. Sometimes patients will struggle for years without finding a solution. But ketamine acts on a different neurotransmitter pathway within the body and can act as a reset for patients.

Traditional antidepressants like selective serotonin reuptake inhibitors, or SSRIs, act on neurotransmitters like serotonin, dopamine or norepinephrine, but it is thought that ketamine acts on the glutamate receptor system and may be a more helpful neurotransmitter system to target in people with treatment resistant depression.

“The glutamate pathway is the one that is more dysregulated for many people,” Jones said. “It’s more off balance in their mental health disorders, and that’s where we can help.”

As an intramuscular injection rather than an IV, ketamine treatment at Centerspace pairs with a patient’s existing mental health treatment plan. It’s designed to fit into their current system rather than replace it. Patients enrolled in the clinic work with a therapist to determine their goals before beginning treatment and then can expect 4 to 6 injections throughout.

Importantly, ketamine can help patients after a few doses or sometimes even within 24 hours, while SSRIs can take weeks to be effective.

Most ketamine treatment for depression resides in the clinical trial phase of research, which makes the offerings at the MUSC clinic unique. Patients at Centerspace are also treated by mental health professionals and only with evidence-based treatment. And while ketamine has not been approved as a treatment option for depression in the U.S. yet, it has been approved in Europe, and its subtype esketamine has been approved in the form of a nasal spray and is covered by insurance.

At present the Centerspace program targets depression, but depression is often accompanied by other disorders, such as PTSD or generalized anxiety disorder. Jones pointed out that as ketamine has continued to go through the research process and be studied more and more, it looks helpful for other conditions as well.

“PTSD has been studied very specifically,” she said. “But with the recent FDA approval of esketamine we’re able to see just how helpful it can be [for other conditions].”

Jones says she is driven by the urgent need to find more effective treatments for mental health patients, and through research and places like Centerspace, she hopes to provide more options for people with treatment-resistant conditions.

And LalithKumar Solai, M.D., the mental health chief and vice chair for the department of psychiatry at MUSC Health, says this is just the beginning of new psychedelic treatment offerings at MUSC.