October 8, 2021
Sanford Zeigler, M.D., medical director of the cardiovascular intensive care unit, says a new program provides data that otherwise would be available only by sitting by the patient's bedside and charting every minute's change. Credit: Sarah Pack

Checking in on a patient in the MUSC Health cardiovascular intensive care unit recently, cardiac surgeon?Sanford Zeigler, M.D., who also serves as the unit’s medical director, was worried about the patient’s kidney function.

A key indicator was borderline; the care team had to decide whether the patient should receive fluids or diuretics, which decrease fluid. Normally in a situation like this, the doctors would make a decision based on an on-the-spot exam of the patient and the nurses’ reports.

But a few months ago, the CVICU began using a continuous data visualization system that gives doctors a minute-by-minute look at each patient’s vital signs. Developed by?Etiometry, a clinical decision-support software company based in Boston, the software showed the team a graph of the patient’s central venous pressure reading from throughout the night. With that data in front of them, the decision of what to do was no longer borderline, Zeigler said.

“That helped us make that small decision a little more easily. And if we do that multiple times every day, patient safety will be much better,” Zeigler explained.

The MUSC Health CVICU is among Etiometry’s first adult intensive care partners in the U.S.; the company’s original focus was on pediatric cardiac patients. For adults, the data visualization portion of the software is FDA approved. That’s the graph that Zeigler used to decide whether his patient needed fluids or diuretics.

“It means we can see changes in real time as they happen and compare them to what’s been happening in the last hour or few days with much greater ease,” he said.

Etiometry already has two Food and Drug Administration-cleared algorithms that alert doctors when pediatric patients on ventilators are either not receiving enough oxygen or not getting rid of enough carbon dioxide.?

Through collaboration with MUSC, Etiometry is actively working to validate its risk algorithms for use on adult patients. 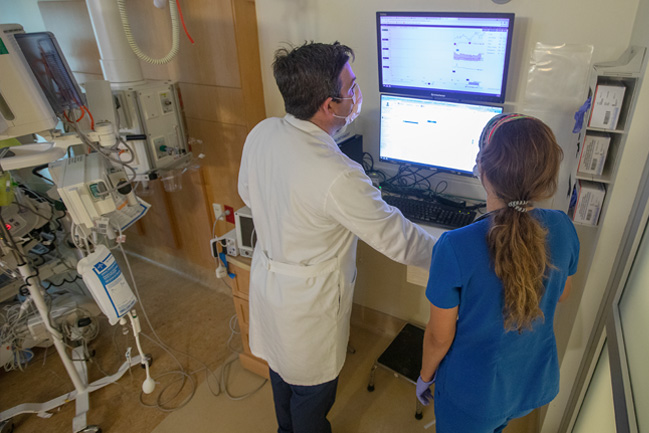 The idea is to alert doctors early that a patient is deteriorating, rather than letting a situation silently develop until “it’s become so obvious you couldn’t miss it, and the patient’s in danger,” Zeigler said. “It's an early warning system in a lot of ways.”

Some of this information can be found in the electronic medical record. But EMRs are designed more for record keeping than bedside decision-making or prediction. They don’t offer a continuous detailed record of the patient’s physical state but only show those moments in time when someone entered the information into the patient’s chart.

“You think, ‘Oh the EMR is going to be this treasure trove of data' — and it is — but when you get down to the individual patient and making a decision in the moment, it’s not the best source,” said Henry Szymanski, Etiometry’s senior director of marketing.

Even without the risk-analysis algorithm, the Etiometry software has made a difference for the CVICU, Zeigler said.

“It unlocks the data that otherwise the only way you could get it was to sit at the bedside all night and look at it yourself,” Zeigler said. “It makes life much easier for everybody to be able to see all this data and not be chasing our tails trying to find it. We can actually just look at it and start thinking, rather than spend all that effort trying to collate everything.”

Doctors can review the data at the patient’s bedside or from their offices, giving them the opportunity to check on patients while completing paperwork.

Etiometry and MUSC Health are working on an agreement to implement the system within the operating room so that doctors in the CVICU will be able to see their patients’ vital sign histories from when they were in surgery as well as their time in the ICU.

The company’s ultimate goal is to provide doctors with an uninterrupted, moment-to-moment account of a patient’s journey through the hospital, from the operating room to intensive care to a general care floor and, finally, discharge.