Chatter in the brain consists of rapid zaps of electrical impulses.

These impulses travel along a network of synapses and culminate in a brain wave. It’s these brain waves that then direct a particular action, thought or emotion. A healthy brain processes each of these brain waves and translates the signal into a response, but when too many neurons send the wrong signals, electrical activity is discharged. Enough misfiring leads to blood pressure spikes, a pounding heart and muscle convulsions — in other words, a seizure.

According to the Centers for Disease Control and Prevention, three million adults and almost 500,000 children in the U.S. had epilepsy in 2015. In 2014, there were 2.5 million traumatic brain injury-related visits to emergency departments in the U.S., and in 2018, almost 600,000 people came to the emergency department for stroke. Any kind of scarring in the brain can lead to an isolated seizure — whether congenital or from an injury — but when someone is diagnosed with epilepsy, they are experiencing recurrent seizures that impact their lives regularly. And it’s important to know right away if a patient’s seizure is isolated or part of a disease like epilepsy.

Researchers and physicians in the neurology and neurosurgery departments at MUSC are working together to incorporate the latest technology into patient treatment plans to detect seizures and attempt to predict a patient’s chances of having another seizure.

“Often, when a patient has severe seizures, their family is scared to leave them at home alone,” said Jonathan Halford, M.D., a professor of neurology and director of the translational research unit for the two departments. “Many family members don’t feel like they can leave their loved one at home to go to the grocery store in case they have a horrible seizure when no one is there to help them.”

Halford looks at seizures as a symptom of a greater disease, illness or injury. “And while treating the symptom doesn’t cure the patient, it can help them resume their daily lives.” This symptom in particular varies from patient to patient. One patient may have a seizure every week while another has only one a year. But even at such varied intervals, people with epilepsy can’t drive, and not knowing when a seizure might occur can produce constant anxiety. “Even though the disease isn’t necessarily constant, it’s still a significant one to tackle — for both patients and physicians,” he said.

The ways epilepsy and intermittent seizures strip away some- one’s independence as well as their cognitive function and mental health have led physicians at MUSC to work with collaborators at biotechnology companies and other universities to develop new devices, tools and treatment options.

Since seizures can affect memory, it is possible for patients to have seizures, potentially daily, and have no recollection of them. Physicians use an electroencephalogram, or EEG, to measure and record healthy brain activity as well as seizure activity. 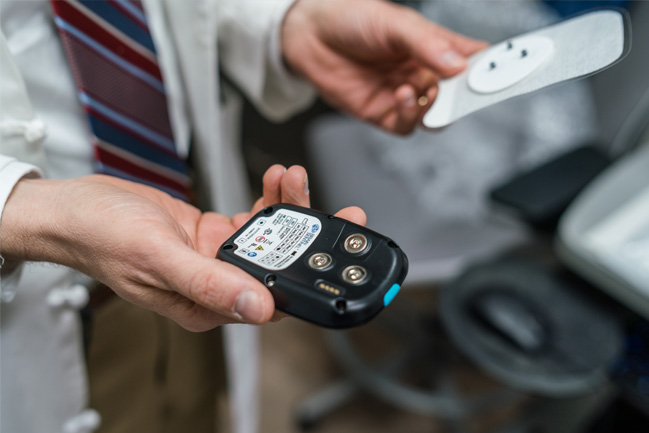 An EEG is performed by placing electrodes in strategic places all over the skull, almost like a cap. These electrodes read the patient’s brain activity for a period ranging from minutes to sometimes even days. Once the EEG recording is complete, a neurologist must pore over the output data: dizzying page after page of horizontal lines and vertical spikes. Physicians spend hours looking for any anomalies and attempt to determine whether a person had a seizure during that period or if they are at risk for another one in the future.

Sarah Schmitt, M.D., an associate professor of neurology at MUSC, is working with multiple centers across the country to create and test a prediction algorithm that uses AI to help physicians learn more from their patients’ readings. By tapping into data collected by the Critical Care and EEG Research Monitoring Consortium, the team assessed the validity of this algorithm and rating scale, which is referred to as 2HELPS2B, and found it to be a promising tool for hospitalized patients, especially when a reading was performed over the course of 24 hours, by helping physicians predict which patients were at risk for a seizure in the future. Results were published in a recent paper in JAMA Neurology.

Schmitt said it is important to stratify seizure patients into urgent and non-urgent care groups but also to make sure she is seeing everything in each of her patient’s EEG readings. By alerting her to which patients are most at risk for a future seizure, 2HELPS2B saves her time. “Our goal is always to make sure that we find the seizures as quickly as possible,” she said. “And that we identify those who are at the highest risk as quickly as we can.”

While neurologists at MUSC have used AI in the past, Halford has been looking for ways to improve upon it. As recently published in JAMA Neurology, there are not enough experts qualified to read and interpret EEG results, so in conjunction with Massachusetts General Hospital, Halford helped create an algorithm that looks specifically for interictal epileptiform discharges (IEDs), which represent a critical biomarker for epilepsy and seizure risk. By recognizing these spikes in the readings, the algorithm can quickly assess a person’s brain activity, and after testing its validity, the team found the algorithm to be as good as, if not better than, expert analysis.

“With automation and AI, we can spend less time in front of a screen and more time engaging with patients,” said Halford.

In addition to algorithms and automation, physicians, researchers and engineers are working together to develop new and wearable neurophysiology-based recording devices.

Wearable devices for seizure detection have been in development by multiple companies over the past five years. Immediate treatment and intervention during a seizure can be critical, so both physicians and caregivers are looking for new ways to recognize and respond to these episodes.

In the last few years, Halford and a team at MUSC have been working with the company Brain Sentinel, Inc., to develop and test a device that is worn on the upper arm and is designed to recognize when someone is having a tonic-clonic seizure and then notify either physicians in an inpatient setting or caregivers and family members for patients no longer at the hospital.

A generalized tonic-clonic seizure, also known as a grand mal seizure, takes place across the entire brain rather than in a localized area. The electrical signaling disturbance takes place on both sides of the brain and can cause a patient to lose consciousness and have severe muscle convulsions. Using the Brain Sentinel monitoring and alerting system with patients, Halford and his team found that the device detected these seizures and notified hospital staff in under eight seconds, according to their study in Epilepsia in 2017.

Seizure notifications can be sent via text message, email and signaling from the device, and patients can wear the rectangular device on their upper arm every day.

As the first FDA-approved wearable device for patients with epilepsy, this system continuously measures surface electromyographic (sEMG) activity in the arm. The multicenter study mentioned above showed that a device like this is effective and can provide peace of mind to caregivers while also aiding in immediate intervention for people with epilepsy.

Utilizing the growing trend in wearable devices is becoming increasingly popular as physicians like Schmitt and Halford want easier ways to monitor patients without additional clinical or hospital visits. In addition to immediate intervention, these devices can help detect seizures in people who aren’t aware they’re having them.

“I have young patients, 17 or 18 years old, and they want to go off to college, but their parents are so afraid they will have a seizure when no one is around,” said Schmitt. “The security and comfort that comes with devices like these is so helpful to their quality of life.”

Another way physicians are enhancing their treatments and techniques is with neuroimaging. Ekrem Kutluay, M.D., professor of neurology and medical director for the MUSC clinical neurophysiology labs, says that enhanced neuroimagery has been one of the most impactful technologies in his practice. 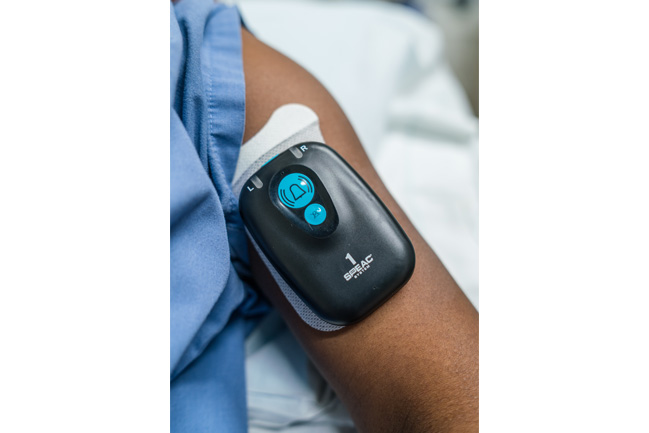 The latest model of this device is smaller and less bulky for patients and should be approved by the FDA this spring.

“Ten years ago, almost 50% of patients who came to see me would have a normal MRI scan,” he said. “Sometimes, we wouldn’t know why they were having seizures.” But with today’s enhanced MRI technology and dedicated MRI protocols he can see structures at a higher resolution and determine where any minor changes or abnormalities might be.

“It’s like when we had tube TV’s,” Kutluay said. “We liked them. But now that HD TV has emerged, we can never go back.”

Some treatment options for patients with epilepsy include medication, deep brain stimulation and epilepsy surgery. The medications are designed to alter either the electrical activity in neurons by targeting ion channels or the chemical transmission between neurons by targeting neurotransmitters. The challenge with anti-seizure medications, according to Schmitt, is that there are side effects to consider, such as weight gain, sleepiness and slowed thinking. There are also patients for whom medications don’t decrease the number of seizures, and so some of them look to surgery.

Surgery targets the area of the brain where the seizure activity takes place, but it only works in, at most, two thirds of patients. Ezequiel Gleichgerrcht, M.D. Ph.D., who is currently completing an epilepsy fellowship at MUSC, combines enhanced imagery techniques like diffusion MRI with deep learning and computer algorithms to learn more about his patients’ brains before surgery and to predict who is likely to be seizure-free after surgery.

In a study published in Epilepsia, Gleichgerrcht and other members of the team used this imagery to reconstruct the whole-brain neural architecture in his patients.

The abnormalities associated with epilepsy are unique to each patient. “When looking at someone’s neural network, you can decide which nodes have a greater influence and are more critical to their information flow and what is affected by their epilepsy,” Gleichgerrcht said. This information is then given to a computer to build an algorithm that looks for patterns between patients and helps predict which ones are more likely to become seizure free after surgery.

Leonardo Bonilha, M.D., Ph.D., epilepsy division director and endowed chair at MUSC, is currently leading a five-year, multisite study to expand on this algorithm as well as combining diffusion MRI, functional MRI and resting state MRI to create an even more detailed picture of the brain and predict epilepsy’s effect on a patient’s brain.

All these improvements in wearable technology, brain imaging and seizure prediction help physicians at MUSC and around the world treat people with epilepsy more successfully. Schmitt says it helps give some of her patients back their independence. “It can give them their life back.”