CJ Knighten describes a normal pregnancy and birth of her son, Hunter, at a hospital near their home outside Charleston. She and her husband's genetic test results raised no concerns, "so there was no expectation of any surprises," she says. However, her newborn failed two hearing tests at the hospital, which the audiologist attributed to fluid in his ears. Also, Knighten noticed that Hunter tended to look down and the shape of one of his ears appeared different than the other.

"The doctors said he might have laid on his ear in the womb," says Knighten. "They didn't dive into a diagnosis, which made me feel everything was okay."

In fact, there were a lot of unanswered questions and unaddressed needs. After leaving the hospital with Hunter and a referral in hand for another hearing test, she took him to his first pediatrician visit. Hunter's doctor noted some distinctions in his face and ears and suggested that Knighten bump up his next ear exam, which he would also fail. This time the audiologist said his ear canal needed time to grow. Now she was concerned.

"I didn't know what I needed help with," says Knighten. "They kept saying things just needed to grow."

Then, out of the blue, the community audiologist cancelled Hunter's next hearing test.

That's when Knighten decided to take matters into her own hands. After putting Hunter to bed that night, she says she "went down the rabbit hole to find out all the information I could." Ten minutes after googling "underdeveloped ears," a picture of a little boy with features similar to Hunter's popped up. His diagnosis was Treacher Collins Syndrome (TCS), a rare congenital disorder characterized by craniofacial abnormalities. Her next search took her to the Children's Health Craniofacial Anomalies and Cleft Lip & Palate Team at the Medical University of South Carolina (MUSC), which she emailed. Then she sat up most of the night with her husband, talking through tears what she had learned. 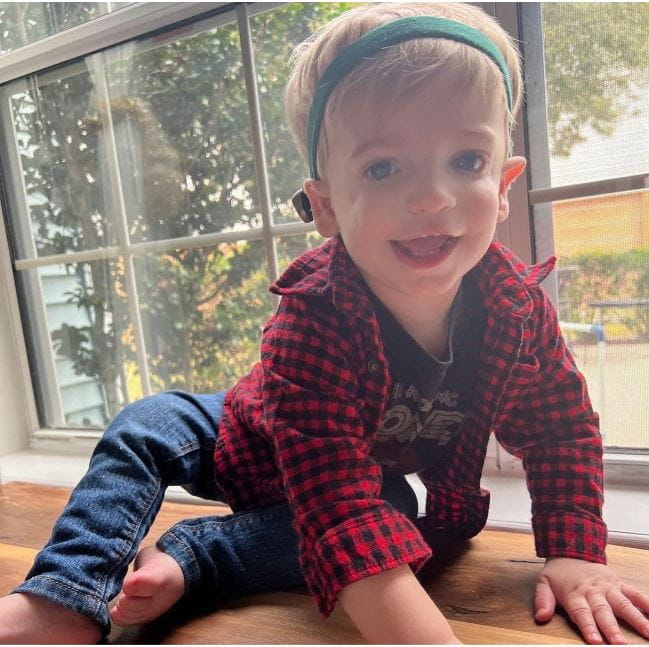 "The biggest moment in your life is when you birth a baby and all you hope for is a healthy and happy baby," says Knighten. "When you find out your baby may be diagnosed with x, y or z, and you don't know what that means, just saying that out loud is scary."

Early the next morning, Knighten heard back from ear, nose, throat and facial plastics surgeon Krishna Patel, M.D., Ph.D. at MUSC, co-director of the craniofacial team. A week later, Knighten learned much more about TCS and treating it when she, her husband and Hunter showed up at the clinic. There she met Patel and the team, learned how they work with patients and parents, and underwent genetic testing to confirm Hunter's diagnosis.

"The initial interaction was incredible because we went 2 ½ months without anyone knowing or advising us or giving us a diagnosis," says Knighten. "To be at the hospital within one week and get guidance and what to do next and from somebody who cares and understands what we just went through, was exactly what we needed. We didn't know how lost we were until we got there."
Patel notes that the complexity of the disorder, including underdevelopment of the cheekbones, jaws, palate and mouth, and malformations of the eyes and external and middle ear structures, requires multidisciplinary care, ideally at an academic medical center like MUSC. The team, accredited by the American Cleft Palate-Craniofacial Association, includes audiologists, craniofacial and ENT surgeons, child psychologists, geneticists, oral maxillofacial surgeons, orthodontists, pediatric dentists, pulmonologists and speech language pathologists, among others. As there is no cure for TCS, treatment targets specific symptoms.

"Children with TCS can have different levels of needs," says speech language pathologist Melissa Montiel MS, CCC-SLP, also a co-director of the team. "Their hearing loss may be the biggest focus, or their actual speech and how their palate is working. Early intervention is key."

And key to that early intervention and appropriate continuing care is social worker Julia Black, the team's coordinator. She describes her job as the clinic's chief communicator and go-to person for parents and families. Supporting parents new to having a child with a developmental or functional disability, partly through connecting them with community resources, is also part of her job.

"I help families navigate the health system and the complexities of having a child with a craniofacial disorder," says Black. "A lot of our families have social needs back home, so I help them connect with those systems as well to ensure they deliver the care appropriately and that their kids continue to thrive at home."

With TCS occurring in 1 in 80,000 births, opening virtual doors to national and global resources is important as well. Hunter's mom connected with a 3,000-member social media group of TCS families from the United States to Australia to Russia, agrees.

"It's common that we hear similar stories like ours, of children going undiagnosed and parents not knowing their needs and available resources," says Knighten. "Because of the rarity of TCS my family has found our best resource has been other TCS families who have gone through that experience."

Two weeks after Hunter's initial clinic visit, Knighten received the genetic test results confirming, along with his clinical evaluation, his diagnosis and need for specialty services. Although children with TCS share common traits, each is assessed and treated as an individual, stresses Montiel, who is also a co-director of the clinic: "It's not one size fits all."

For Hunter, initial issues to address included his hearing loss, which audiologist Claire Hauschildt, AuD confirmed at his first visit. With a diagnosis of conductive hearing loss, which signals problems with sounds passing through the outer and middle ear to the inner ear and cochlea, Hunter needed a bone conduction hearing aid.

"With Treacher Collins, it's either the outer ear has not formed correctly, the ear canal is too narrow, or the vibrations in the inner ear that produce sound cannot reach the cochlea," explains Hauschildt. "His cochlea works perfectly fine, the sounds just can't get there."

Hunter's mom was overjoyed when the hearing aid arrived: "We got it before he turned 3 months old, which is important—now he can hear just like everybody else."

Why is it important to hear early on?

"If you cannot hear speech correctly, you will not learn how to produce it correctly," says Hauschildt. "And that can have long lasting effects on behavior, temperament, learning in school and your ability to learn spoken language."

Montiel, who follows patients' language process every six months, agrees. In assessing children early on, she says, spoken words are not on her radar as much as verbalizations: "Are they assessing and understanding the language spoken to them, how are they using not just words but pointing and gestures to communicate what they are trying to say."

The team also offers surgical treatments to children with TCS, cleft lip and palate. Some of the surgeries are ideally performed later in life to allow the underlying bones and tissues to grow with the child to reduce the risk of repeat operations. Surgery may happen sooner if the craniofacial disorder is severe and potentially life-threatening, like a significantly small jaw creating breathing difficulties in early infancy. In complex jaw cases, the team's surgeons rely on innovations like 3D simulations and designed implants to achieve desired outcomes for patients.

In addition to the ears and jaw, cheekbones and eyelids are candidates for surgeries as well, for both aesthetic and functional purposes. Underdeveloped or absent cheekbones, along with abnormal tissues around the eyes, may cause the eyelids to angle downward, the face to appear flatter. Also, without the cheekbone's support of the eyelids ability to blink, their protective role is compromised.

"Orthognathic surgery to project the jaw and cheekbones in the teenage years allows for better facial proportions and functionality," says Patel.

Similarly, malformations in the jaw and mouth in children with TCS may result in dental abnormalities, such as teeth that are underdeveloped and/or misaligned. This is where orthodontists come in, adding to the sea of specialists required to treat TCS. How do they work together?

Again, coordinator Julia Black is the hub, matching and scheduling patients with providers at each twice-monthly clinic. The team also rounds with each patient and meets outside the clinic to discuss progress in their individualized plan. Merged by a mission, the team is a close, collaborative and compassionate group.

"Everyone on our team cares very deeply about these children and truly looks out for their success and that of our families," says Black. "That makes me appreciate the specialty care and training we have here, which builds confidence in our families that we're providing the best possible care."

Montiel concurs, noting egos about what's best for the patient seem to disappear: "We're all good about understanding our own disciplines and limitations, which is rewarding in a way. It really is about experts leaning on other experts."

The craniofacial team works with patients until age 18 or longer if requested by the patient and family. Otherwise, they transition them to adult craniofacial specialists at MUSC.

And how is Hunter doing with this group?

"Even though Hunter's diagnosis did not come in the timeline we would have expected," says Black, "he's excelled and done great."

His mom agrees, so much so that she has become a vocal parent advocate for children with TCS and their families. Working with the South Carolina Governor's office, she and others helped the state designate May 28th Treacher Collins Awareness Day and July Cleft and Craniofacial Awareness Month.

Her message for new parents of a child with TCS?

"A new diagnosis, especially one you most likely didn't expect or were prepared for can be overwhelming," says Knighten. "But don't forget you just gave birth to a beautiful baby. Congratulations! Don't miss out on those newborn snuggles. Your baby has an incredible life ahead and you get a front row seat." 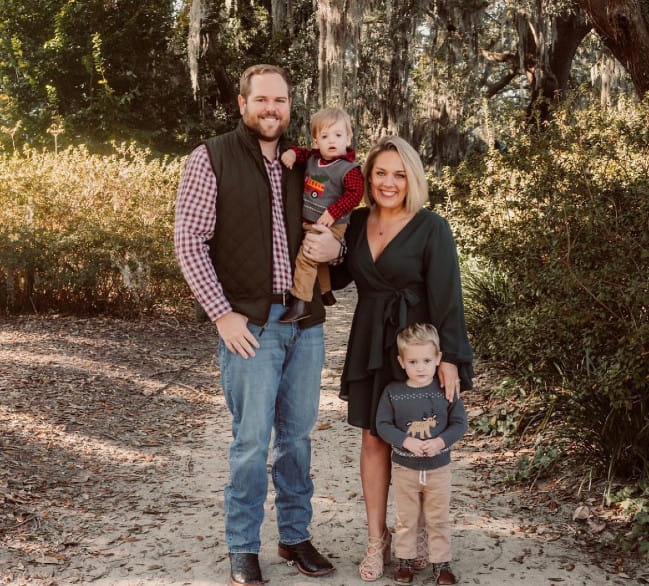