We navigate in a world of endless information streams, but we can function by screening and judging the incoming stimuli. Our eyes casually ignore the hangings on our walls, the signposts on the way to work and the cracks in the sidewalk, but we constantly scan our environment for new or important input, which we then label and sort. A dog darts into the road? Look out — slow down! A friend gets a new haircut? It looks great — I should let her know. The phone screen lights up? I took care of that reminder — I can ignore it.

For cancer detection and diagnosis, a similar process occurs. Physicians first look for anomalies that stand out from the back- ground and then categorize them — benign or malignant — so they can choose the next appropriate action. Until recently, these steps were performed by humans and our limited computing capacity.

But in the era of artificial intelligence (AI) we are beginning to teach computers how to both detect and discern, which can help physicians save precious time and deliver the best care possible to their patients.

At MUSC, Jeremy Burt, M.D., an associate professor of radiology, and Nicholas Pastis, M.D., a pulmonologist and lung cancer specialist, are working with complementary technologies to drive the detection and diagnosis of lung cancer forward by using advanced robotics and AI.

Early in 2020, the American Cancer Society (ACS) reported a 2.2% decrease in the overall U.S. cancer death rate. This is the largest recorded single-year drop and caps off a resounding 29% reduction in cancer deaths from 1991 to 2017. The latest decline was driven by decreases in lung cancer deaths among both men and women, which the ACS attributes to reductions in smoking and better detection and treatment options for lung cancer.

Yet even with this positive news, the American Lung Association (ALA) reports that lung cancer remains the leading cause of cancer death in the U.S. and globally, causing more deaths than breast, colorectal and prostate cancers combined. And importantly, the chance of survival depends on the cancer stage at diagnosis: if a tumor is detected early, when it is still contained within the lung, the 5-year survival rate is about 56%, but if the cancer has spread to other areas of the body, that rate drops to 5%.

To help increase early detection, both the ACS and the ALA endorse the low-dose computed tomography (CT) screening program for high-risk individuals: those who are 55 to 80 years old, have a history of heavy smoking, and are still smokers or quit within the last 15 years.

As a result, Pastis says that lung cancer screening has really taken off across the U.S. And studies have shown that it is working: low-dose CT screening decreases mortality by 14 to 20%, and with 8 million Americans who qualify for screening, the life-saving potential of this program is vast.

High-res detection: Finding the oddities that deserve a second look

Although the low-dose CT screening program has been in place since 2011, many high-risk patients either don’t know about the program or don’t participate because of obstacles such as fear of medical testing. 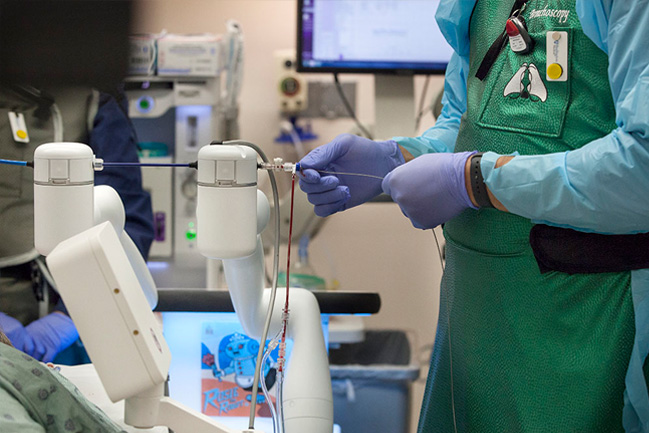 Nick Pastis, M.D., threads a bronchoscope into a patient’s lung. He will use a joystick to maneuver the bronchoscope to the exact position of a lung nodule.

Burt says, “We’re not doing a great job at diagnosing lung cancer early. If we were able to diagnose that cancer earlier, we would have much better outcomes in terms of both costs and morbidity.”The barriers to participation may be lowered by patient education and physician engagement, but if all eligible patients were to show up for the test, another obstacle would rear up. Burt explains that with a low-dose CT, the scan is read slice by slice by a radiologist, and pulmonary nodules can be extraordinarily difficult to find and assess. For each patient, there can be 60 to 80 slices to read, and in some cases up to 100 slices. Multiply that by 8 million, and the workload would be unmanageable.

But with a new software tool that Burt is working on, called LungWeb, he plans to use AI to lighten the load. “Why not help the radiologist by using AI to find and identify nodules?”

The LungWeb system visualizes CT scan data on a pixel-by-pixel basis and can register differences at a high-resolution level that the human brain simply cannot match. The concept is that the software detects any nodules in the scan and clearly marks them so they are easy to identify. The radiologist can then quickly recheck the area to confirm the finding.

“The great thing about software and AI is it doesn’t get tired, and it’s very reproducible,” Burt says. “Humans have a lot of distractions, so it makes sense to let the computer do the detection work.

This is well supported by a study published in the journal Radiology that found a 49% mean sensitivity for lung nodule detection among radiologists reading chest CT scans; whereas LungWeb’s accuracy is projected to exceed 90%.

Another benefit of putting the software to work is an increase in speed and throughput. It takes radiologists an average of 3 minutes to identify lung nodules on a chest CT scan, but the computer can do it in a matter of seconds.

The downside to LungWeb at present is that it occasionally gives false-positive results by making mistakes that a human expert would not — for example, it may rarely detect a normal blood vessel and call it a nodule — so it will still be important for a radiologist to confirm the software’s findings. But Burt is continuously refining the software to eliminate these false positives, and he hopes to have LungWeb ready for a clinical trial by fall.

Locating nodules is just the first step of the detection and diagnosis pathway. Physicians must next determine which nodules are malignant tumors and which can safely be ignored.

The current standard of care is to screen patients by low-dose CT scanning and then monitor or biopsy nodules with an indeterminate or suspicious appearance. But Pastis regularly performs biopsies to diagnose lung cancer and explains that the traditional method, CT- guided needle biopsy, carries its own risks.

“The problem with screening is that the majority of nodules found are not cancer,” he says. “And CT-guided needle biopsy can have a complication rate as high as 15 to 20% where people get collapsed lungs, bleeding or infection.”

This danger is being minimized at MUSC with a newly purchased robotic bronchoscopy machine that is the only one of its kind in South Carolina. This machine provides greater control to the physician and a less invasive procedure for the patient. It also allows the physician to navigate to far peripheral nodules that were previously unreachable and obtain adequate sample tissue.

“The robotic scope gets you there and lets you have very fine motor control of the tip of the scope way out in the lung,” Pastis says. “It has a mother-daughter scope configuration. The larger scope locks you in position, then you put out a very thin scope that allows you to steer through multiple branches of the lung and angle the needle directly into the nodule.”

The machine holds a lot of promise in other ways as well. For example, Pastis explains that a staging bronchoscopy can be per- formed in the same setting as the robotic bronchoscopy to look for spread to other lymph nodes and to stage the cancer during the same procedure. There is also the potential that one day the machine can be used to deliver treatment, and preliminary experiments are under way.

The only caveat with the robotic machine is that a negative result for biopsied tissue does not automatically rule out cancer. If there is no separate diagnosis to explain the nodule — for example, infection — some patients will need further follow-up.

While robotic bronchoscopy is making lung cancer biopsy increasingly safer, another feature of LungWeb is that it can take the data collected by CT scans and use AI to determine the likelihood of cancer in specific nodules, making it easier to determine which nodules should undergo biopsy.

“The output can be something like, ‘There’s about a 90% chance this is benign or a 30% chance this is malignant,’” Burt says. “The great benefit would be getting rid of all those negative nodules so that the patient doesn’t have to worry for months.”

LungWeb is being trained on over 80,000 chest CTs from numerous publicly available databases, which translates to millions of images for training and validation. And once LungWeb enters the clinical trial phase, physicians will be able to test it in real time. Burt envisions that eventually the software can be used to examine any chest CT that comes in to catch pulmonary nodules early.

Finally, after a lung cancer diagnosis, physicians must still deter- mine if the cancer is localized or has spread. The current method of staging is to perform a positron emission tomography (PET) scan, but this technology has a resolution limit of 8 mm, which means it can miss smaller but still critical lymph nodes as well as tumors that don’t show up well on PET scans. Therefore, Burt is developing a second algorithm that uses AI to examine lymph nodes in the chest CT and predict the chance of metastasis. For example, the software will be able to say that a lymph node shows an 80% chance of metastasis, or perhaps a 10% or 0% chance, which will help with staging and with guiding the surgeon to the most suspicious areas.

This new algorithm is still in early development, but Burt hopes that it along with LungWeb will one day provide the equivalent of one-stop shopping, with detection, diagnosis and staging all per- formed with the chest CT — one procedure, no biopsy.

Meanwhile, the advanced robotic infrastructure at MUSC is already providing less invasive diagnosis and staging of lung cancer as early and safely as possible for patients across the state.
“A lot of times people have nodules detected but smaller hospitals don’t have the technology to deal with them,” says Pastis. “We have the opportunity to minimally invasively diagnose them and sometimes prevent surgeries or other procedures that are unnecessary.”

Both doctors agree on the ultimate goals of these efforts: to find lung cancer early and save lives.

“The thought of being able to decrease the number of deaths from lung cancer is amazing,” Burt says. “We’re finally able to do it, because the technology’s finally up to speed, so it’s an exciting time.”