Uncovering the Mystery of the Pineal Cyst

Like his colleagues, MUSC neurosurgeon Sunil Patel, M.D., learned in training that most patients don’t experience any symptoms from a cyst on their pineal gland. But as a fluid-filled enlargement on a small pinecone-shaped gland, pineal cysts were the only abnormal finding in many patients who presented with headaches and visual disturbances, some severe.

Something wasn’t adding up.

In his mind the cysts, while not cancerous or malignant, were somehow involved in these symptoms and needed to be treated rather than dismissed. As these cysts are located near the center of the brain and difficult to resect, however, performing a surgery with little proven benefit was not often considered at the time of his training. Patel vividly remembers seeing his first pineal cyst patient 15 years ago, and he felt up to the challenge.

"Having done a lot of pineal region surgeries for other things, like tumors and aneurysms, I knew I could take it out,” says Patel. “Two weeks later she came back a completely new woman after five years of misery. It was a turning point for me — I knew I may be onto something because of this historic patient with a symptomatic pineal cyst.”

Since then, Patel, chair of the Department of Neurosurgery at MUSC, has become a national leader in diagnosing and treating pineal cysts. Through his experience he’s observed a constellation of neurologic symptoms, including cognitive issues, insomnia and near syncopal episodes in addition to headaches, nausea and visual problems.

Connecting these symptoms with pineal cysts is no easy matter, especially when it comes to diagnosing children, especially infants and toddlers.

“You have to be very careful to correlate symptoms with cysts, which is hard to do in very young patients who cannot talk and verbally communicate how they are feeling,” says Libby Infinger, M.D., a pediatric neurosurgeon at MUSC. “You have to go on other things like the parents’ observations.”

Patel treats adults, and Infinger treats children; but together they have performed a combined 160 pineal cyst resections, likely the world’s largest case series of pineal cyst surgeries. That places them among only a handful of neurosurgeons who are experts in safely excising them.

With their craniotomy approach, Patel explains, they access the back of the head and can directly view the pineal region with little or no manipulation of the brain tissue through the space between the two hemispheres.

They’ve developed ways to make the surgery less invasive through leveraging advances in technology. For example, they employ an exoscope, a camera that peers down the surgical pathway and provides 3D views of the pineal cysts. A literature review of clinical cases found this camera to be a safe alternative to an operative microscope, with easier use and better 3D vision and magnification of the surgical field.

Technological advances like the exoscope and digital neuro-navigation and mapping software, which Infinger has vast experience in using, have helped reduce risks for children by allowing smaller incisions and less tissue trauma. While the surgical approach for children is similar to that for adults, Infinger notes, everything is smaller, including the size of the head and the thickness of the bone.

“The dura you have to open to get to the pineal gland region can have more blood vessels than in older patients,” adds Infinger. “It’s a fairly risky procedure because these cysts are deep in the center of the brain. Not everyone is trained in how to approach this type of excision, and not everybody is comfortable performing this surgical approach.”

With any surgery, risks can include infection, and with craniotomy there is also the possibility of hemorrhage. About one-third of patients come out of surgery with some temporary visual disturbance (blurry or double vision), but all have improved within a week or two according to Patel.

The pineal cyst team includes a neuro-ophthalmologist and a neuroradiologist to help assess and treat any postsurgery issues such as temporary vision disturbance. 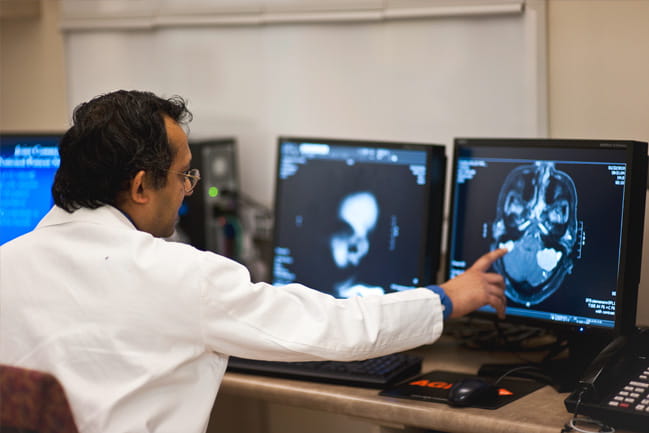 While the two neurosurgeons have successfully resolved symptoms for almost all their patients, their experience has been accompanied by a mystery that continues to nag them. In the brain, a displacement (mass effect) of normal tissue such as by a tumor causes symptoms, yet the culprit here is a minute cyst. While excising it has been shown to eliminate patients’ symptoms, they’ve been unable to determine what’s triggering them in the first place.

Patel, who was drawn to the nervous system because it contains the most unanswered questions in medicine, was well groomed to search for the answer. His quest to demystify pineal cysts triggers memories of taking on his first microdiscectomy as a chief resident in neurosurgery. As he prepared to make his first incision, his mentor grabbed his hand and offered some career-long advice.

“He looked into my eyes and said, ‘From now on, when you do this operation, I want you to think about what we can do someday to stop this barbaric act.’ So, when I took the herniated disc out,” Patel said. “Instead of throwing it into the trash, I asked the scrub tech to send it to pathology so one day a molecular pathologist can look at that tissue and determine what’s different about this herniated disc and a normal disc. That’s the way I’ve approached all of my cases.”

Building a case for removal of symptomatic pineal cysts, Patel surveyed 100 patients months after their surgery. When asked if they would go through the surgery again, they all answered yes. Patel concluded that they all got better. So far, they have observed no correlation of severity of symptoms and the size of the cyst. What was abundantly clear, however, is how quickly patients recover.

“It is clear that the cystic pineal gland has to be producing something that is causing a chemical effect,” says Patel. “The most dramatic thing is how quickly their symptoms improve after surgery. The next day they clearly tell you how instantly they felt better.”

Through their joint surgical experience, Patel and Infinger have also accumulated a significant amount of pineal cyst tissue to embark on initial research with MUSC molecular biologist Russell Norris, Ph.D. Understanding the disease pathways that cause altered biology, Norris explains, will hopefully lead to development of nonsurgical drug treatments.

“We have developed Institutional Review Board-approved clinical registries for some of these diseases and actively recruit patients to build out our genetic discoveries,” Norris said. “Ultimately, we are developing platforms that will lead to off-the-shelf personalized medicine treatment for these rare and common diseases.”

“A few quick steps after that, once you know what the chemical is, our pharmaceutical colleagues can figure out what the answer is,” Patel said. “Can we not design a medicine or injection? My dream would be a shot or a pill that we can prescribe.”

Infinger would love to avoid surgery altogether. “Ideally we could find a way to treat these cysts without surgery,"  she said. "Maybe by shrinking them or making them go away, and then we wouldn’t have to take them out.”

Patel won’t predict when the answer will come, but he remains optimistic and driven.

“We have a lot of technology these days, we’re able to look at the genome and RNA, proteomics, and other ‘omics.’ This story might end sooner than you think,” he said. “In figuring out pineal cysts, I know I can’t take my last breath until I learn exactly why it’s causing these symptoms.”