Was it a snakebite, an autonomic nervous system disorder, or a hole in her heart that led to this teen's years-long bout with migraine headaches, accelerating heart rate, fatigue and vertigo?

In eighth grade, out of the blue, Ella Dawson began to experience symptoms similar to those from a snakebite—labored breathing, dizziness, migraine headache, nausea and swelling in her ankles and feet, despite not being bitten by a snake. Most concerning was her racing heart rate and fatigue.

"It was definitely hard to get by every single day, I was taking 4-plus hour naps daily," says Ella. "I was sleeping through school."

What was the cause?

Her pediatrician suspected dysautonomia, an autonomic nervous system disorder that affects functioning of the heart, bladder, intestines and blood. Her fast heart rate, or tachycardia, appeared most alarming, so the pediatrician immediately referred Ella to a community cardiologist, and she ended up seeing two.

Due to her symptoms, the first cardiologist performed a tilt test to determine if Ella was suffering the symptoms of postural orthostatic tachycardia syndrome (POTS), which affects the heart rate during standing. Echocardiogram imaging to visualize how blood moves through Ella's heart then revealed a surprising suspect—a hole in her heart, specifically in the septum or wall that divides its upper chambers. Most atrial septal defects (ASD) are congenital, affecting six in 10,000 births. The cardiologist noted that this ASD was small and less likely to cause her symptoms, and prescribed medications to manage her racing heart.

Through her high school years, however, Ella did not respond well to the medications, including beta blockers and steroids. While she tried to remain active in sports she loved, swimming and volleyball, she continued to experience migraine headaches and fatigue.

"She just kind of bombed out again, throwing up, dizzy and nauseous with migraines," says Ella's mom, Erica Dawson. "She was missing so much school."

Intuitively, like many mothers, Erica went back to Ella's birth and early years for answers. She recalled that Ella was a tiny baby who suffered "horrible reflux" but was never diagnosed with reflux, was on multiple formulas and labeled failure to thrive. She wondered, was the ASD more of a factor: "She was so very active that we overlooked a lot of it as she got older."

Erica relayed her concerns to Ella's second cardiologist, Margaret Gray, M.D., at Prisma Health in Columbia, South Carolina. Gray, noting Ella's lethargy, agreed that they should take another look at her ASD and, after doing so, concluded the ASD might actually be a cause of her symptoms. Gray, who trained at the Medical University of South Carolina (MUSC), then referred Ella to MUSC pediatric and adult congenital invasive cardiologist John Rhodes, M.D., for treatment, who confirmed to the family the need for ASD closure.

"Not only did Ella have a hole in her heart but Dr. Rhodes found a flap that was leaking blood the wrong way," says Erica. "It needed to be sealed."

Rhodes explained that Ella's symptoms were not unusual for a patient with an atrial septal defect. ASDs allow left-to-right shunting in the heart causing an overload of the right ventricle, but at times they can also shunt right-to-left and allow unoxygenated and unfiltered blood to enter the left heart blood going to the body and brain.

"Ella had an ASD that shunted both ways, thus causing the right side of her heart to enlarge and potentially cause her other symptoms," says Rhodes. "The migraine headaches and some of her other symptoms can sometimes be related or worsened by the ASD. Symptoms generally start to occur around age 8 or so," he adds, "and definitely by the time they enter puberty."

The good news was Ella would not have to undergo open heart surgery. Instead, she was a candidate for a minimally invasive transcatheter approach, in which a small device is folded up like an umbrella inside the catheter that is threaded through a blood vessel in the groin to the site of the hole. There it is released and stitched into place, covering the hole.

Still there were risks, including those posed by the metallic framework, or scaffolding, of traditional devices used to close ASDs. The presence of metal in the heart, Rhodes says, can irritate the heart, causing arrythmia and stimulating clots. Rhodes then told Ella that MUSC was participating in a new clinical trial designed to determine if a non-metal ASD device with two patches and a bioresorbable frame could improve outcomes for patients needing ASD closure.

"Once you put this ASD device in the atrial septum, in three to six months the scaffolding will have started to resorb and by a year be completely gone," says Rhodes, the principal investigator of the trial. "It allows you to close an ASD in young patients and for the rest of their lives no longer have any metal in their heart. If this trial proves out, in future procedures physicians will not have to go through a metal frame. That's the theory behind it."

Ella qualified for the ASD Investigational Device Exemption (IDE) Trial, a global multi-site study that will enroll up to 250 patients to study the safety and efficacy of the device. Ella would be one of the first patients at MUSC to enroll in the trial. Ella and her parents didn't have to be persuaded. 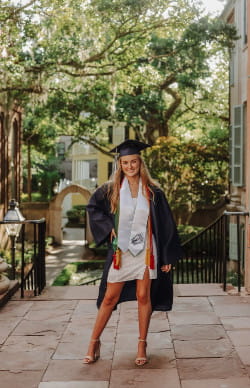 "I was pretty excited. I liked the idea of it, something new and innovative," says Ella. "I really didn't have any hesitations about it."

Overall, Ella's symptoms have improved since her procedure in March 2022. However, she does experience some episodes of breathlessness and a faster heart rate with exertion, which Rhodes explains may take some time to resolve. Five months out from her procedure, Ella moved into her dorm as a freshman at the College of Charleston near MUSC. She is considering engineering as a major, playing grass volleyball and planning a trip to Italy. She couldn't be happier, says her mother.

"Ella is excited to be going to school in Charleston, to be a part of the study and close to Dr. Rhodes," says Erica. "She feels so much better having gotten the procedure done. I'm delighted she's so happy. Ella is a different person, living her best life."